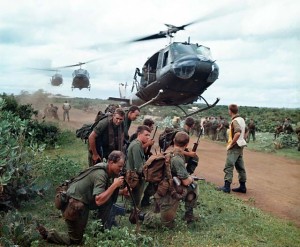 Blue Mountains Vietnam Veterans’ Association was formed on ANZAC Day, 1985 as an autonomous, apolitical organization to foster social contact with all who have had any active service, in any service arm or civil capacity, during the period of the Australian involvement in the war in Vietnam. In 1997 its’ successor, Blue Mountains Vietnam Veterans and Associated Forces Inc. was formed and now accepts veterans who have served in all post World War II theatres of war, special operations areas, and peacekeeping operations

Our Philosophy:
Because of the character of this association, it does not involve itself in any possible controversy on Vietnam or in any other matters relative to any military involvement. This association now places strong emphasis on involvement in members’, their families and/or dependant’s welfare/needs in its activities.

The Objectives of our Association

Statement of Objects of this Association are:

1. To provide relief without discrimination to ALL veterans, their families and dependents and for present and future members of the Armed Services and their dependents

2. To provide welfare advice and support to assist members, their families and dependents, by way of welfare officers, to obtain evidence necessary to commence and pursue claims for compensation for disability or death suffered during Service related activities.

3. To provide relief from poverty, sickness, suffering, distress, misfortune, destitution or helplessness to persons recognisably in need of assistance.

4. To support and comply with the principles and promote the objectives of the Disability Services Act 1992.

5. To conduct the association for the ongoing benefit and welfare of Veterans, their families and dependents and also for past and present members of the Defence Forces and dependents.

6. To seek Government funding and assistance in providing support for the ongoing welfare of members and /or their families in demonstrated need of assistance.

7. To uphold the interests of all members and their dependents and to safeguard their good name.

8. To conduct the objectives without consideration of private gain for individuals or for financial gain for the Blue Mountains Vietnams Veterans & Associated Forces Incorporated.

9. To maintain public awareness of the role played, and those services provided by the Blue Mountains Vietnams Veterans & Associated Forces Incorporated.

10. To create, promote and cherish a bond of comradeship between members and to foster espirit-de-corps.

11. To honour the memory and revere those who have served and suffered as a consequence of war.

12. To promote and organise social gatherings of the members and their families.

The Association produces a bi-monthly newsletter which has a circulation of over 600 members throughout Australia and overseas; the Association also conducts the largest single club annual parade and Memorial Service for Vietnam Veterans in Australia in the village of Springwood NSW, Memorial day is held on the closest Sunday to the Federally recognised Vietnam Veterans’ Day held annually on 18 August (Long Tan Day).

Membership renewals – Membership fees become due as of 1st January each year .

Would those members who have not paid their subscription ($10.00 per calendar year), and intend to remain members of this Association, please assist your management committee by remitting their monies ASAP. If you wish to remain a member would you please advise the Secretary so that the membership database can be adjusted accordingly.

Your Committee thanks you for your continuing support.